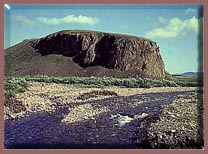 Although the debate is ongoing, at present the archaeological record of northeastern Siberia, western Beringia, indicates no human presence there prior to 15,000 years ago and the record in Alaska suggests that humans did not cross the Land Bridge and enter North America much before 12,000 years ago. However, what happened after these earliest immigrants reached eastern Beringia, Alaska, is the subject of even greater debate. Did these ancient humans enter the Western Hemisphere through Alaska moving southeastward into the interior; or did they arrive by more exotic routes, perhaps by sea along Alaska’s southern coast, or possibly across the open Pacific Ocean even further south? Answers to such questions about the earliest Americans and their travel routes probably await chance discoveries in the future. In the meantime, there are several other intriguing pieces to the puzzle surrounding early humans in Alaska that are being addressed through an interdisciplinary project led by the Bureau of Land Management in collaboration with researchers at the University of Alaska Fairbanks, Columbia University, and NASA. The research is being conducted in northern Alaska, primarily within the 23 million acre National Petroleum Reserve-Alaska and involves archaeology, geology, paleoecology, paleobotany, and paleoclimatology.

The earliest, securely dated locales of human activity in Alaska come from the interval between 12,000 and 10,000 years ago, the final two millennia of the Pleistocene. These earliest Alaskan populations are represented by a number of archaeological sites in the Tanana and Nenana valleys in interior Alaska, and at several sites along the north flank of the Brooks Range in Arctic Alaska. The surprising thing is that these ancient people are represented by at least two and possibly three distinctly different stone-tool assemblages or lithic industries. In the archaeological record, technological diversity that occurs contemporaneously within a region is usually believed to mirror cultural diversity and these three lithic industries, Nenana, Denali, and Mesa, may represent three culturally distinct groups of ancient hunters and foragers. While the technological difference between Denali and Nenana is somewhat subtle, the difference between them and Mesa is marked. This is surprising because logically these first Americans would all be expected to be part of the same general migration episode, comprising one cultural group, and, therefore, utilizing the same lithic technology. It is interesting that the archaeological record of northeastern Siberia, western Beringia, does not indicate that the technological and cultural diversity of late Pleistocene eastern Beringia occurred. Since the technological and cultural diversity of eastern Beringia does not appear to stem from western Beringia it may well have evolved in the North American Arctic, possibly in response to more regional stimuli such as climate and environment, or containment resulting from the vast continental glaciers to the south.

The climate at the end of the last Ice-Age was more variable than at any time in the following 10,000 years. A variety of evidence indicates that between 12,000 and 9000 years ago, intervals of mild climate were followed by the sudden return of full glacial conditions in the space of only a few years. Such repeated radical swings in climate, especially those associated with the climatically chaotic Younger Dryas event, could have disrupted established ecosystems. Therefore, the technological and cultural diversity among the human inhabitants of eastern Beringia during this time may be the result of humans trying to cope with unstable environmental conditions. It is possible that at the time of the first migrations, Alaska was still isolated from the rest of North America by continental glaciers. Because of this, Alaska may have acted as a holding pen, causing disparate groups to intermingle, initiating the evolution of the original New World cultures.

Today Alaska Natives represent approximately 16 percent of Alaska’s residents, and are a significant segment of the population in over 200 rural villages and communities. The record in Alaska suggests that humans did not cross the Bering Land Bridge and enter North America much before 12,000 years ago. One hypothesis concerning the Paleoindian appearance in mid-continent North America is: sometime after the western Beringian immigrants arrived in eastern Beringia, some of them began to move south toward temperate North America, a journey that may have required 1000 years to complete. During this journey, these people were separated from the Old World western Beringian technological and cultural influence. By the time 30 or 40 generations had lived and died on the road, these ancient immigrants reached the High Plains of North America. Over the course of their travels, their stone tool manufacturing technology had altered to the extent that their lithic industry retained few Old World Beringian characteristics, and it was these people who produced the classic Paleoindian artifact types.

In 1926, the first North American discovery of stone tools in direct association with the skeletal remains of extinct Ice-Age animals was made near Folsom, New Mexico. This discovery indicated that the antiquity of humans in the New World was greater than previously believed. For the next 40 years archaeologists wondered why evidence of the earliest North Americans was found in the heartland of the continent, rather than near the ancient land bridge in eastern Beringia. It was not until the mid-1960s that two lithic industries of Paleoindian age, American Paleoarctic and Denali, were first reported from Alaska, another decade before the Nenana Complex was described, and the Mesa site in the late 1970s.

The Mesa is a sliver of igneous rock which was emplaced in the softer sedimentary country rock during the mountain-building event that created the Brooks Range about 125 million years ago. As part of the oil and gas exploration activities in the National Petroleum Reserve-Alaska during the late 1970s, the Mesa was examined for the presence of archaeological remains when it was considered as a source for hard-rock rip-rap and crushed stone to cap the runway of a nearby petroleum test-well air strip. The site was found because some stone tools and chips were visible on the exposed soil as the result of wind erosion of the sparse Arctic vegetation. The type and style of these surface artifacts suggested they might have been produced by an ancient people called Paleoindians, and that the Mesa site might represent a cultural manifestation quite different from anything that had been previously found above the Arctic Circle in North America or Asia. The discovery and evaluation of the Mesa site by Bureau of Land Management archaeologists prior to the onset of construction activities averted the destruction of what has proven to be one of the most significant North American archaeological sites to have been found in the last 50 years.

Today in Alaska, many Alaska Natives have retained their customs, language, hunting and fishing practices and ways of living. Alaska’s Native people are divided into eleven distinct cultures, speaking twenty different languages. This diverse population, is organized based on five cultural groupings, which draw upon cultural similarities or geographic proximity: